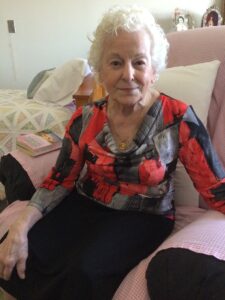 Lora, age 98, sits reading her romance novel in her oversized armchair, covered in a pink gingham throw that she sewed herself. She is receptive to being interviewed and appreciates the company, escorting me down her memory lane.  Reminiscing about her childhood on a farm in North Providence, she excitedly tells me about the good old days when her Italian father slaughtered the pig on Sundays and invited the extended family for dinner, serving his home-made wine.  They had chickens and goats and lots of vegetables in their garden.  Her mother would get up at 4:00 AM to weed and had a kitchen in the basement for canning.  “I really had it so good and never realized it until later in life”, Lora says wistfully.

She married and had a son and a daughter and was always the dutiful mother and wife: cooking and cleaning and doing the laundry and sewing. Lora still has a sewing machine in her apartment and boasts about how she made all her daughter’s dresses, until her daughter turned 11 and wanted store-bought clothes.  I look around her one room apartment at Winslow Gardens where she has lived for the past ten years and notice how it shines and everything is perfectly in its place.  Just like Lora: who always looks perfectly put together – stylishly dressed.  When asked how she looks so young, she credits Oil of Olay skin cream that she religiously used.  Looking at her wrinkle-free face, I can’t imagine that she ever endured any hardship in life, but after a while she reveals more.

“I used to take two buses to work at Trifari in East Providence, where I set rhinestones in pins for 25 years,” she relays to me. In fact, she set the rhinestones in Mrs. Eisenhower’s pearl necklace that she wore during Dwight’s inauguration.  Lora also tells me how her husband was too ill to work consistently throughout their marriage and I get the idea that she carried the family through those times.  “I never had much of anything, but never went hungry or lacked necessities.  I never bought on credit.”

Lora learned about Winslow Gardens when her husband was so ill that he had to go into Linn Health Care Center where he lived out his last days. “They took wonderful care of him.  I can’t say enough good things about that place,” she tells me referring to the adjacent nursing home to her present home.  Her husband passed on 16 years ago.

She suddenly said, “You want to hear a sad story?” Then she proceeded to open up to me.  A couple years after her husband passed, she met a nice man at a musical performance – in fact he played in the band.  He was a younger man and she warned him of her older years, but it wouldn’t stop him to taking a strong liking to her.  They dated for a while and he spoiled her with gifts – something Lora never had experienced before.  Her life had always been so full of hard work.  He whisked her off to Italy and while there proposed marriage to her.  Lora felt like Cinderella at the ball.  But while exiting a bus on that trip, he collapsed, leaving Lora screaming for him to get up.  He had suffered a fatal aneurysm.

So here she is at Winslow Gardens, painting with oils and still cooking and sewing; enjoying her grandchildren when they come to visit. “Life is so hard sometimes,” she tells me tearing up.

“Ah, but the memories,” I reply, “they are so beautiful, aren’t they?”

CDC: Know the facts about COVID-19
CDC: COVID-19 Symptoms
CDC: How to Protect Yourself
CDC: Coping with Stress

Read the Stories of the folks who live, work, and volunteer at the Aldersbridge Communities properties. We are an interesting group!

News for general information about Aldersbridge Communities and its properties, including press releases, announcements, official staff and management employment changes.