A Safe Space to Age in Place with Aldersbridge: Gamache and Glass in PROJO 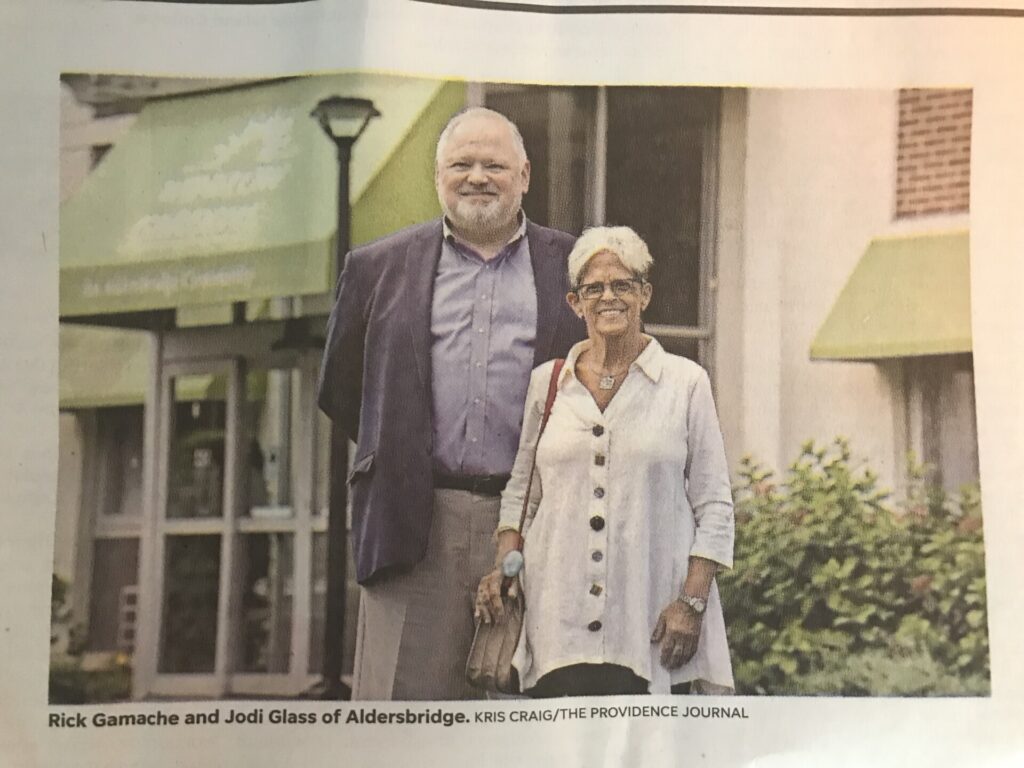 The East Point complex will bring a total of 390 housing units to East Providence, 10% of them affordable

Four years ago, when Jodi Glass joined the board of Aldersbridge, a nonprofit that runs health care centers for older adults, she had already been working on an issue close to her heart — care of the aging population of LGBTQ people. “Elder LGBTQ folks, they don’t have children as they do now in the younger generation, and their support systems are more lateral,” she said. The idea of a better support system for older members of the queer community started percolating for Glass 15 years ago. When she joined Aldersbridge, formerly known as United Methodist Elder Care, her project gained momentum and direction as she helped form the policies, trainings and procedures to deter discrimination in assisted living and nursing homes, both from residents and staff.

‘Deeply hurtful’: More states make it harder for LGBTQ people to foster or adopt children Glass and Aldersbridge CEO Rick Gamache had a bigger, bolder plan in mind: build an income- and age-restricted apartment complex to serve aging members of the LGBTQ community. With a little luck, a little help from the City of East Providence and the right timing, Glass’s vision is set to become a reality as Aldersbridge and the nonprofit housing developer One Neighborhood Developers are trying to build a 39-unit apartment building as part of the sprawling, 390-unit East Point housing project in East Providence, on the east bank of the Seekonk River. The apartment building will consist of studios, 1-bedroom and 2-bedroom apartments on the 27-acre property. Gamache said their building will be the first of its kind in Rhode Island.

The need for LGBTQ-friendly senior housing
Finding housing as an aging member of the LGBTQ community can be especially hard because community mores used to be so different, Glass said. “Elders grew up in a much different time, when it was illegal to be gay,” she said. Many people who need help around the house or to be seen by visiting medical staff still worry about the need to “de-gay” a house before workers come over, she said.

Glass, a lesbian, said when she was looking at housing for her mother-in-law, she had to tell nursing homes that they are a lesbian family, and she didn’t want other residents or staff to punish the matriarch for her daughter’s sexual orientation. In many instances, people avoid saying they are in a relationship, instead identifying as brother or sisters or friends, she said. “They’re just frightened of the treatment they’ll receive,” Glass said. The housing complex she is developing will be for LGBTQ people and their allies, she said. “It makes sense because LGBTQ elders need to be empowered to live out of the closet for the rest of their lives,” she said. When she runs training programs in the Aldersbridge facilities, it’s likely among the residents, not the younger staff, where the biggest issues arise. “I had a very objectionable person, a resident, who was just being very nasty about the whole topic,” Glass said. “Another resident, who said he fought in World War II, said, ‘I had a gay fellow right next me to, fighting beside me, just as anyone else.'”

While it’s nice when others stand for members of the LGBTQ community, it’s even nicer when no one has to, she said. “It really does get tiring,” Glass said, referring to the constant need to defend herself as a lesbian. Gamache said his experience has been that older, LGBTQ-identifying people often avoid public housing or even assisted living because of the fear, or experiences, of being discriminated against, ostracized and bullied. “Sometimes they feel like they have to go back into the closet and can’t be who they are, and can’t live the way they should live, want to live,” Gamache said.

Right place, right time, right incentives
When Glass joined the Aldersbridge board, she told Gamache she wanted to bring two things to the group’s facilities: music and a focus on LGBTQ issues. Gamache said he was happy to oblige, and that Glass’ passions were the reason he recruited her to the board.

When Glass first started working on creating LGBTQ-friendly housing 15 years ago, she contacted Barbara Sokoloff, a consultant on housing projects. At the time, she conducted focus groups to understand the depth, the breadth and the types of housing needs in the aging queer community. Once she joined Aldersbridge, Glass picked up where she had left off and called Sokoloff. “We looked at sites around the state and the City of East Providence suggested the East Point location because it had just been approved by the city and it had an affordable housing component,” Sokoloff said.

The East Providence Waterfront Commission approved the 27-acre, 390-unit East Point housing project, but required 10% of the units, 39, be income restricted. That allowed Aldersbridge to negotiate a deal with the developer, Noble Development, owned by Richard Baccari, she said. Sokoloff suggested Aldersbridge partner with a nonprofit that specializes in building housing to make funding requests more desirable, so they partnered with One Neighborhood Builders. One Neighborhood Builders Executive Director Jennifer Hawkins said the project is laudable for its LGBTQ-inclusivity, but that East Providence also deserves credit for demanding affordable housing as part of the complex, a type of inclusionary zoning. “That really triggered this opportunity,” Hawkins said.

From brownfield to housing
The entire project, both East Point and its affordable housing component, are moving forward quickly as the final permissions are secured, including for a railroad crossing at the edge of the property, said East Providence Planning and Economic Development Director William Fazioli.

The 29-acre lot is the former home of Ocean State Steel, which shut down in 1994. The state provided $240,000 to clean up the site in 2015. While the project has been approved by the East Providence Waterfront Commission, it needs to get past one final board before the property will be sold. “It’s taken a long time, because of the legacy of oil tanks and heavy industrial over the past 60 to 70 years, and it takes quite a while to remediate,” Fazioli said. The complex will add more density to the area, uses existing infrastructure and is close to transit, he said. “At the last public hearing, the developer said they hope to start construction later this calendar year,” he said.

A safe space to age in place
Since Aldersbridge is already based in East Providence and maintains a safe space for LGBTQ residents, opening an age- and income-restricted housing complex is a perfect complement to the other housing services it runs, to allow people to age in place, or to set them up for an easy transition into assisted living, Gamache said. “As people age and chronic conditions get unmanageable, we’re here, just a mile up the road, so we can take care of them,” he said.

Income-restricted housing is also important to the aging population because usually they are not working or able to work, which means incomes are limited to Social Security checks and One of Aldersbridge’s missions is to make sure people continue to get health care even when their resources run out, but the group also fundraises to help pay for its operations. It is running a silent auction from Sept. 16 to 25 in hopes of raising at least $10,000.

Lining up the funding sources
Gamache said he is hopeful the project may open as soon as the fall of next year, but everything depends on lining up enough financing for the project. While the project hasn’t yet gained approval for state funding, Sokoloff said she is hopeful it will later this year, especially since the legislature approved $250 million for affordable- housing projects, although much is earmarked for specific uses. $250 million for housing: A slice-by-slice look at Rhode Island’s $13.6-billion state budget Hawkins said Aldersbridge is one of three projects her group is putting in for funding, and getting enough money to finish the “capital stack” is the main impediment to starting construction.

As seen in the Providence Journal:
Reach reporter Wheeler Cowperthwaite at wcowperthwaite@providencejournal.com or follow him on Twitter @WheelerReporter.