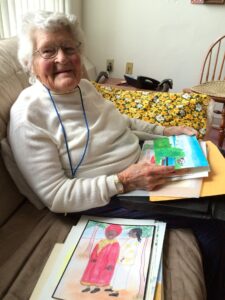 I sit with Myra on the couch at her Arbor Hill apartment and she shows me her artwork and the notecards that she makes to raise money for five different charities. They are primarily nonprofits that help victims of human trafficking, as well as her church, Victory Assembly of God.

“You’re very talented, “I comment while sifting through her mountains of artwork.

“Only through God,” Myra replies humbly, “I write poetry too.”

“I have a poem somewhere around here called “Where’d I Put It?” she chuckles as she gets up and peaks in a few folders on her dresser, “but I can’t find it right now.” She chuckles some more. I am wondering if she is pulling a joke on me or if she really wrote a poem about that. I’m a little naïve that way.

Myra suggests to me that we should purchase exercise equipment and open a gym for the residents. She tells me that she used to be in the army and enjoys working out.

“I have to take it easy for now because I just had my first heart attack,” she matter-of-factly relays as if she planned to have several more. I marvel because she is almost 93 years old.

Growing up in Albany, New York, Myra was raised as a Methodist.   She has dedicated herself to God and spends every Sunday afternoon handing out tracts about Christianity because “all the trouble in the world is all in the Bible.”

“I’m never too old to do God’s work,” she tells me, “You know, it’s incredible how God works through people to accomplish things. Wow! Really amazing!”

Myra has a long list of accomplishments in life: having raised two kids and adopted many “spiritual” children as well, starting a library at her church, raising money for charities and traveling to Viet Nam, where her son lives.

She is resilient having endured much in her youth: orphaned and abused before she was adopted. “God was good to me by giving me people to watch over me.”

“Yeah, don’t get too much stuff in your life. Now where did I put that poem?”

Adding Life to Years Gala has been rescheduled to September 12, 2020 at the Omni Providence Hotel.

Donate Your Car To Charity

Read the Stories of the folks who live, work, and volunteer at the Aldersbridge Communities properties. We are an interesting group!

News for general information about Aldersbridge Communities and its properties, including press releases, announcements, official staff and management employment changes.